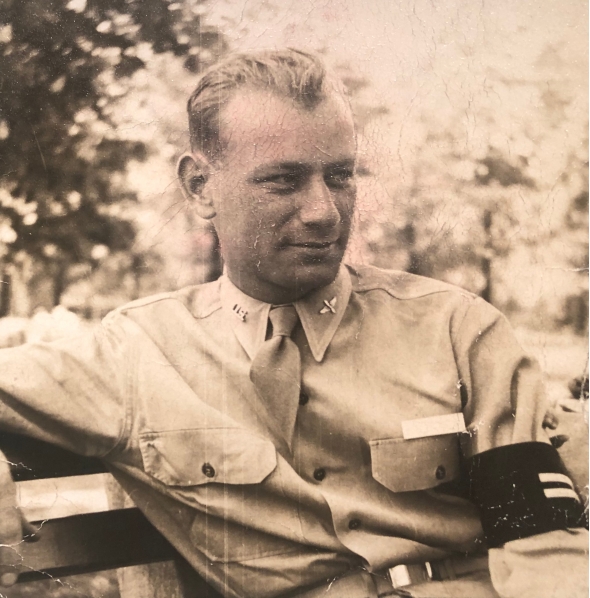 Over the years, we have serviced thousands of estates and their respective families. It's not often that we see estates that fall into the "veritable time capsule" category for the quality of their collections. When we do, we like to highlight them in a special way. But, the real story often comes to light when we dig beyond the tangible "stuff" contained within the estate -- when we get an in-depth glimpse at the person behind the estate.

Such is the case with the estate of Sanford (“Sandy”) L. Batkin. Although this estate collection features fine decorative smalls, an extensive Israeli art collection, Judaica, sterling silver, and jewelry, as well as an assortment of vintage, mid-century modern, and antique furniture which rounds out this New Rochelle, NY estate, it's Sandy's story that captured our hearts. You see, during the course of cataloging, photographing, and preparing this estate, we discovered that Sandy was an activist, collector, and true "Renaissance man" throughout his nonagenarian lifetime.

Sandy, a Brooklyn-born boy who grew up in a charitable Jewish household was compelled as a young man to serve his country during World War II. He joined the Army Air Corp as an engineering officer (after receiving training at Yale) and served in the Pacific campaign. Undeniably, both his military service and Jewish heritage influenced Sandy and played major roles in his strong support for the creation of the State of Israel, as well as his support of and activism with many Jewish charitable organizations and causes including the UJA, Israel Bonds, the Jewish Museum, and David Yellin Teacher’s College.

He had an especially strong affinity for the Anti-Defamation League (ADL) and developed a deep friendship with one of its key attorneys, Arnold Forster, a civil rights and State of Israel advocate who fought against antisemitism and extremism for nearly six decades.

Supporter of the Arts

Sandy’s support for the Jewish State played a key role in his continuous backing of the arts in Israel. In fact, for over four decades and with numerous trips to Israel, Sandy purchased the majority of the works of art in his estate collection directly from the artists themselves whose artistic genres run the gamut from landscape oil paintings to modernist brass sculptures.

Some of the contemporary Israeli artists (among many) featured in his collection include: Aharon Bezalel, Anna Ticho, Jacob Ben Shalom, Jacob Pins, Jacob Steinhardt, Ruth Levin, and Shraga Weil. Here are some of the highlights from Sandy's personal collection ....

Aharon Bezalel, born in Afghanistan was the son of a rabbi and kabbalist. In the late 1930s, the family relocated to Jerusalem where Aharon studied art, gold- and silver-smithing and crafting, and carving. His art chiefly consists of sculptures -- wood, bronze, and metals -- and are on display in Israel and throughout the world. He also authored a book, published in 2009, "To Leave a Blessing: Memories of a Jewish Boy from Harat, Afghanistan," which describes memories of his family life, his boyhood Afghani Jewish community, and his early years in Jerusalem.

Anna was born in Moravia (now known as the Czech Republic) in 1894. Her family moved to Vienna when she was a teenager. By 1912, she emigrated to Jerusalem (then part of the Ottoman Empire) and married her cousin, Avraham Albert Ticho. During a brief exile during World War I, Anna sketched landscapes. By 1918, the Tichos returned to Jerusalem and settled into a mid-19th century Jerusalem mansion where she lived until her death in 1980. Her works of art were exhibited from the 1920s throughout the post World War II era.

Best known for his brass sculptural works, Jacob Ben Shalom is a contemporary Israeli artist who was born in 1932 in Jerusalem. He studied Hebrew scripture and artifacts, which no doubt strongly influenced his artistic style.

Jacob Pins was a German-born artist who had a particular interest in Japanese prints and paintings. In 1936, Jacob moved to Palestine to study art. By the 1940s, he moved to Jerusalem and began studying woodcut and linocut art. His German roots and interest in traditional Japanese block printing strongly influenced his art, particularly in the realm of German expressionism. In the mid-20th century, Jacob taught at Israeli art schools and helped to found the Jerusalem Artists' House. His extensive personal collection of Japanese art was left to the Israel Museum. Most of his own artwork was left to his home town's Forum Jacob Pins Museum. He passed away in Jerusalem in 2005.

Jacob Steinhardt was yet another German-born artist who studied at School of Art in Berlin in the early 1900s and by 1908, he moved to Paris to continue his studies with the likes of Matisse, among others. Jacob immigrated to Palestine (modern day Israel) in 1933 after enduring harassment by the German Nazi regime. There he became a teacher and eventual director of the Bezalel School of Art. Mostly known for his woodcuts depicting biblical and Jewish subjects, he also created numerous paintings influenced by expressionist styles. He passed away in 1968.

Ruth Levin was a Czech-born artist who had a long and varied art career ranging from painting and illustrating children’s books to operating a graphic design studio in Jerusalem to even publishing a book on Egyptian landscapes. She studied art in Jerusalem, London, and Washington, D.C. and went on to teach the art of painting at the David Yellin Teachers Seminary in Jerusalem. She passed away in 2006.

Shraga Weil is another Czech-born artist who, as a youth, was sent to study sculpturing with a local sculptor. During World War II, Shraga produced his first graphic works while in captivity. Surviving the war, he moved to Israel in 1947, where he lived until his death in 2009. In the mid-20th century, Shraga continued to study art -- namely mosaics, murals, and graphic techniques. Throughout his career, he worked as an illustrator and designer for a publishing company, worked on important architectural projects (i.e., the main doors of the Knesset, the main door of the Israeli President House, to name a few), and worked as a graphic designer. Shraga was an active artist into his nonagenarian years.

The Renaissance men of the days of yore were considered cultured, educated, and knowledgeable men who were proficient in a wide variety of fields (art, academics, thought, etc.). Modern history continues to use the moniker to refer to present-day people who posses the same qualities.

Sandy was, by all accounts, a dynamic “Renaissance man.” In addition to being a collector and activist, he authored a book in his later years, “The Boy Behind the Door (How Salomon Kool Escaped the Nazis).” He continued to work well into his nineties. In fact, Sandy was was interviewed by Brett Johnson of NJ Biz in 2014 ("At 91, he’s still working, still contributing and still teaching the younger generations a thing or two.") while working at the DAK Group.

With all of this in mind and in continuance of Sandy's legacy, the estate of Sanford L. Batkin is donating 2% of the hammer price from the estate auction to the Anti-Defamation League, an organization whose mission is "to stop the defamation of the Jewish people, and to secure justice and fair treatment to all." Black Rock Galleries is pleased to match that donation. For more information on the Anti-Defamation League, their mission and goals, click here.

SIGN IN TO COMMENT
Sanford L. Batkin: Activist, Collector, & Renaissance Man. Black Rock Galleries provides high end estate liquidation services through online estate auctions and a 50,000 sq ft designer showroom. estate liquidator, estate sale, online auction, antiques, fine art, liquidation, clean outs, auction, consignment, interior design, fine jewelry, collectibles, appraisals, estate appraisals, estate services, decor, furniture, furniture consignment, antique center, consignment shop. We offer appraisal services and specialize in fine art, jewelry, antiques and decorative arts. Sell with us. Black Rock Galleries is the tri-state's largest estate liquidator serving New England and the greater New York City area. We are the trusted source for expert appraisals, auction services, estate sales, and consignments. Black Rock Galleries is the east coast's largest and most trusted estate liquidator, with locations in Connecticut, greater Boston, MA and Raleigh, NC, Dallas, TX. We are the best source for expert appraisals, auction services, estate sales and consignments. We have served thousands of families and estates with compassion, professionalism and expertise. BRG works with attorneys, executors, realtors and families to bring the greatest return on personal and estate property in the current market. Our unique combination of services make us the easy choice to get the job done in a timely and stress-free manner. We are with you from the initial consultation to the final clean out. Our house-built online auction software platform offers clients a dynamic approach to liquidating their personal property. This venue is most successful in bringing the best return with the least amount of disruption for our clients. See our services page for a complete description of this offering. Sanford L. Batkin: Activist, Collector, & Renaissance Man