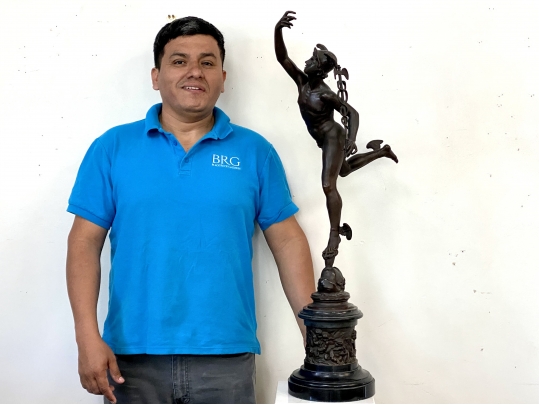 Historically, Mercury was the an ancient Roman Olympian God, who was known to be the messernter of the Gods. He is featured with wings on his feet signifying he swiftness. He is depicted on one foot as if in motion with the one winged foot attaching to a cylindrical, decoratec plinth. In his left hand he is depicted as holding the attribute known as the caduceus, now known as a symbol of modern medicine. With his right he is seen striving upwards reaching for the sky. Mercury is depicted with a winged cap and the figure on the whole is well cast and presents magnificently.
Dimensions: 35 1/2"H x 19"W

Condition: There is wear to the patina in parts and dings with minor losses to areas like his right hand with outstretched fingers. The figure presents well overall and is quite durable being constructec from bronze/