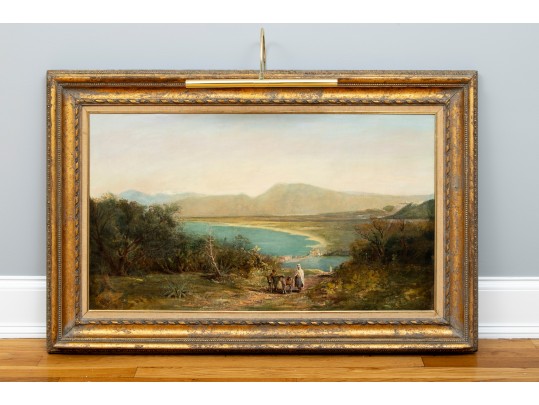 William Keeling (British, 1860-1930), oil on canvas painting depicting a figural landscape with two figures walking donkeys up a dirt path through a landscape with a blue body of water, trees magnificently painted and mountain range in the distant background.
Keeling actively exhibited in Manchester and Liverpool from the 1830's on; By the 1850's Keeling traveled to Spain where is works took on a bright and vibrant palette inspired by the warm climate of the south of Spain. His work was praised by a Manchester newspaper in the 1870's as "perfectly Spanish". He is known to have been inspired by Spanish artist Bartolome Esteban Murillo (1617 - 1682) where is influence can easily be seen in Keeling's depictions of children.
Signed and dated, "William Keeling 1884", to the lower left corner.
Wonderfully framed in a carved and gilt wood frame, with an affixed brass lamp over top for viewing.

Condition: The canvas is lined and an area of restoration can be seen in the lot photos on verso. Overall the painting presents wonderfully and there is minimal wear to the gilt wood frame. Wall ready.

William Keeling (British, 1860-1930), Oil On Canvas Painting, Figural Landscape #201477. Black Rock Galleries provides high end estate liquidation services through online estate auctions and a 50,000 sq ft designer showroom. estate liquidator, estate sale, online auction, antiques, fine art, liquidation, clean outs, auction, consignment, interior design, fine jewelry, collectibles, appraisals, estate appraisals, estate services, decor, furniture, furniture consignment, antique center, consignment shop. We offer appraisal services and specialize in fine art, jewelry, antiques and decorative arts. Sell with us. Black Rock Galleries is the tri-state's largest estate liquidator serving New England and the greater New York City area. We are the trusted source for expert appraisals, auction services, estate sales, and consignments. Black Rock Galleries is the east coast's largest and most trusted estate liquidator, with locations in Connecticut, greater Boston, MA and Raleigh, NC, Dallas, Southport, Apex, TX. We are the best source for expert appraisals, auction services, estate sales and consignments. We have served thousands of families and estates with compassion, professionalism and expertise. BRG works with attorneys, executors, realtors and families to bring the greatest return on personal and estate property in the current market. Our unique combination of services make us the easy choice to get the job done in a timely and stress-free manner. We are with you from the initial consultation to the final clean out. Our house-built online auction software platform offers clients a dynamic approach to liquidating their personal property. This venue is most successful in bringing the best return with the least amount of disruption for our clients. See our services page for a complete description of this offering. William Keeling (British, 1860-1930), Oil On Canvas Painting, Figural Landscape #201477