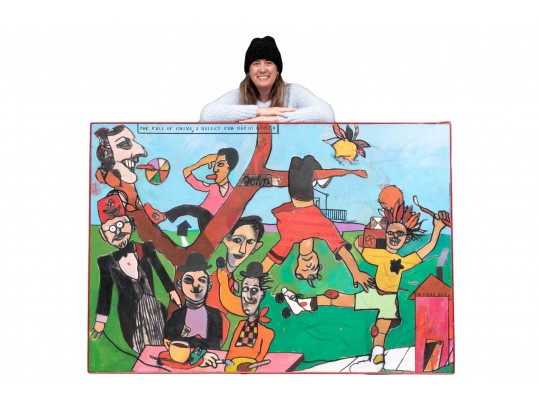 Richard Marshall Merkin was an American painter, illustrator and arts educator. Merkin's fascination with the 1920s and 1930s defined his art and shaped his identity. Many of Merkin's works depict painting narrative scenes in bright colors of jazz musicians, film stars, writers, and sports heroes. Merkin was as well known for his painting and illustration work.
This massive oil on canvas depicts an array of colorful characters, one hanging from a tree-form torso, a Laurel and Hardy type pair seated at a table along with other distinct characters.
Presented in a red trimmed canvas.
Signed on verso and titled.
Helander Gallery label on verso with retail price of $11,000.
Dimensions: 48” x 70”
Condition: good