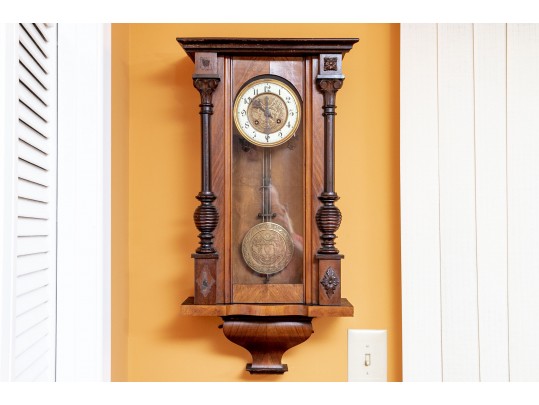 Condition: In overall remarkable condition with expected signs of age and wear including minor decorativive embellishment lost above left column and some moldering lost on side upper right side as shown in photos. Would need restoration but would be a lovely chime as per provenance.

Verbal Provenance: “This clock was made in Germany around 1920. It belonged to the consignor's great-grandparents. In 1943, their house in Frankfurt, Germany was bombed. Only one wall remained standing. And the clock was hanging on that wall. The clock suffered almost no damage except for a piece of decorative molding that was lost in the rubble. The clock continued to run well through to the early 1980s. When the consignor's mother moved to the US in 1983 she brought the clock with her, but a spring inside was broken during the move. She was unable to find a clock repair that could replace it so, the last time the clock has operated was in early 1983. If it can be repaired it has a lovely hourly chime.”

Remarkable Circa 1920s German Wall Clock #196014. Black Rock Galleries provides high end estate liquidation services through online estate auctions and a 50,000 sq ft designer showroom. estate liquidator, estate sale, online auction, antiques, fine art, liquidation, clean outs, auction, consignment, interior design, fine jewelry, collectibles, appraisals, estate appraisals, estate services, decor, furniture, furniture consignment, antique center, consignment shop. We offer appraisal services and specialize in fine art, jewelry, antiques and decorative arts. Sell with us. Black Rock Galleries is the tri-state's largest estate liquidator serving New England and the greater New York City area. We are the trusted source for expert appraisals, auction services, estate sales, and consignments. Black Rock Galleries is the east coast's largest and most trusted estate liquidator, with locations in Connecticut, greater Boston, MA and Raleigh, NC, Dallas, Apex, TX. We are the best source for expert appraisals, auction services, estate sales and consignments. We have served thousands of families and estates with compassion, professionalism and expertise. BRG works with attorneys, executors, realtors and families to bring the greatest return on personal and estate property in the current market. Our unique combination of services make us the easy choice to get the job done in a timely and stress-free manner. We are with you from the initial consultation to the final clean out. Our house-built online auction software platform offers clients a dynamic approach to liquidating their personal property. This venue is most successful in bringing the best return with the least amount of disruption for our clients. See our services page for a complete description of this offering. Remarkable Circa 1920s German Wall Clock #196014