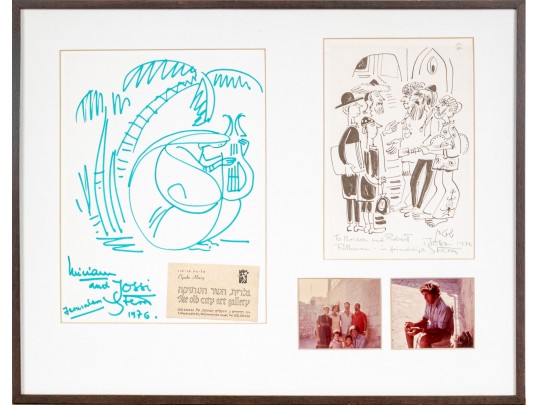 Jossi Stern (1923-1992) was a Jewish artist whom hailed from Hungary and came to Israel in 1940 at the age of 17. After befriending two wealthy immigrants on his travels, once in Palestine they assisted him in financing his art studies at the Bezalel Art Academy.
Stern worked as a graphic editor and illustrator of the Hagana's official paper and following the founding of the State of Israel, Stern worked as an illustrator for various newspapers and media outlets including Yediot Ahronot and Davar amongst others.
Stern's work almost always depicts imagery of Jerusalem, the city that became his home and allowed him to flourish. In addition to imagery of the city, his works frequently depict the myriad of figures within the city, including merchants, beggars and all the types of people in between.
This current work is a collage with a caricature style drawing of Hasidic Jews interacting with another group of Jews, one with a guitar and has been personalized from the artist.
The opposite side with another wonderful caricature, also personalized to Miriam and Robert Rothman.
The collage also has two photographs included.
Frame: 17 1/2"H x 22"W

Condition: Good, there is a card within that is slightly off center but overall a lovely collage.

Personalized Jossi Stern (Israeli, 1923 - 1992) Collage Of Photographs And Prints #205670. Black Rock Galleries provides high end estate liquidation services through online estate auctions and a 50,000 sq ft designer showroom. estate liquidator, estate sale, online auction, antiques, fine art, liquidation, clean outs, auction, consignment, interior design, fine jewelry, collectibles, appraisals, estate appraisals, estate services, decor, furniture, furniture consignment, antique center, consignment shop. We offer appraisal services and specialize in fine art, jewelry, antiques and decorative arts. Sell with us. Black Rock Galleries is the tri-state's largest estate liquidator serving New England and the greater New York City area. We are the trusted source for expert appraisals, auction services, estate sales, and consignments. Black Rock Galleries is the east coast's largest and most trusted estate liquidator, with locations in Connecticut, greater Boston, MA and Raleigh, NC, Dallas, Southport, Apex, TX. We are the best source for expert appraisals, auction services, estate sales and consignments. We have served thousands of families and estates with compassion, professionalism and expertise. BRG works with attorneys, executors, realtors and families to bring the greatest return on personal and estate property in the current market. Our unique combination of services make us the easy choice to get the job done in a timely and stress-free manner. We are with you from the initial consultation to the final clean out. Our house-built online auction software platform offers clients a dynamic approach to liquidating their personal property. This venue is most successful in bringing the best return with the least amount of disruption for our clients. See our services page for a complete description of this offering. Personalized Jossi Stern (Israeli, 1923 - 1992) Collage Of Photographs And Prints #205670