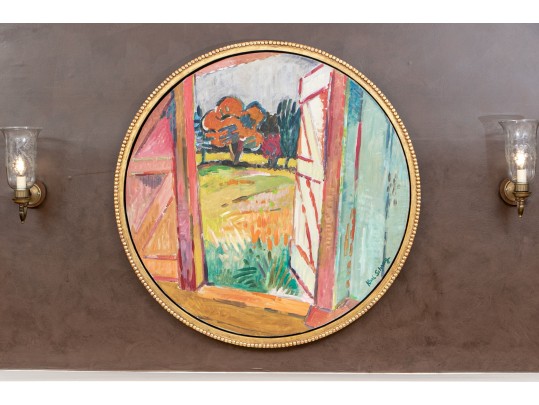 Karl Schrag, painter, printmaker, and teacher, was born on December 7, 1912, in Karlsruhe, Germany. As a boy, Schrag's health was fragile, which limited his participation in physical activities with his friends and family, so he turned to reading and drawing. He made his first linocut in 1926, at the age of fourteen.

Schrag taught at Brooklyn College from 1953 to 1954 and at Copper Union from 1954 to 1968. He had his first retrospective at the Brooklyn Museum in 1960, the most recent at the Farnsworth Art Museum in Rockland, Maine in 1992. His work is represented in museums across the United States and Europe, including the Metropolitan Museum of Art, the Museum of Modern Art, the Brooklyn Museum, the Los Angeles County Museum of Art, the Amon Carter Museum of American Art, the Smithsonian American Art Museum, the National Academy Museum, the British Museum London and the Uffizi Gallery in Florence.

This work, a round oil on canvas titled "Open Barn Door" depicting an impression of an open barn door giving the viewer a sight of the meadow with the trees in the background. Presented in a round gilt beaded frame.
Signed lower right.
Dimensions:
Sight: 39 1/2"
Frame: 42 1/2"
Condition: very good

Karl Schrag (German/American, Born 1912–1995) Oil On Canvas "Open Barn Door" #115313. Black Rock Galleries provides high end estate liquidation services through online estate auctions and a 50,000 sq ft designer showroom. estate liquidator, estate sale, online auction, antiques, fine art, liquidation, clean outs, auction, consignment, interior design, fine jewelry, collectibles, appraisals, estate appraisals, estate services, decor, furniture, furniture consignment, antique center, consignment shop. We offer appraisal services and specialize in fine art, jewelry, antiques and decorative arts. Sell with us. Black Rock Galleries is the tri-state's largest estate liquidator serving New England and the greater New York City area. We are the trusted source for expert appraisals, auction services, estate sales, and consignments. Black Rock Galleries is the east coast's largest and most trusted estate liquidator, with locations in Connecticut, greater Boston, MA and Raleigh, NC. We are the best source for expert appraisals, auction services, estate sales and consignments. We have served thousands of families and estates with compassion, professionalism and expertise. BRG works with attorneys, executors, realtors and families to bring the greatest return on personal and estate property in the current market. Our unique combination of services make us the easy choice to get the job done in a timely and stress-free manner. We are with you from the initial consultation to the final clean out. Our house-built online auction software platform offers clients a dynamic approach to liquidating their personal property. This venue is most successful in bringing the best return with the least amount of disruption for our clients. See our services page for a complete description of this offering. Karl Schrag (German/American, Born 1912–1995) Oil On Canvas "Open Barn Door" #115313