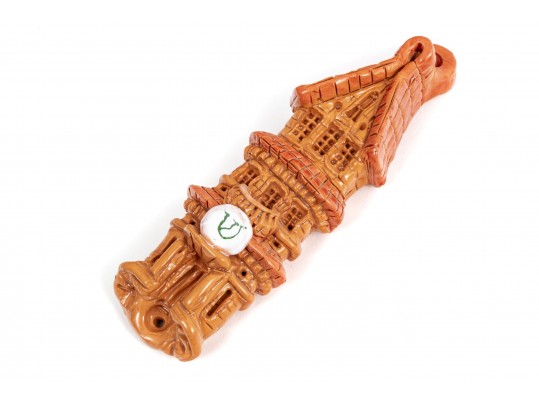 Wonderfully formed as the facade of a building with a peaked roof and three levels complete with windows and a front porch off the second level.
There is a white finished circular applique with a 'Shin' character over the doorwell.

During inspection the current owner whom had purchased this particular Mezuzah case recalled a story which has quite a bit of relevance today. This Mezuzah case was originally purchased in Israel by an artist whom was Russian by decent but had fled the country for Israel. While the artist was unable to attend the Synagogue in Russia, once they arrived in Israel they began working with pottery and ceramics and this magnificent facade depicts the Synagogue in Russia the artist had as a memory.

It was a personal favorite of the current owner and when examining the level of detail its obvious as to why, fantastically crafted and glazed throughout.
6"H

Judaica Glazed Ceramic Architectural Formed Mezuzah Case #203329. Black Rock Galleries provides high end estate liquidation services through online estate auctions and a 50,000 sq ft designer showroom. estate liquidator, estate sale, online auction, antiques, fine art, liquidation, clean outs, auction, consignment, interior design, fine jewelry, collectibles, appraisals, estate appraisals, estate services, decor, furniture, furniture consignment, antique center, consignment shop. We offer appraisal services and specialize in fine art, jewelry, antiques and decorative arts. Sell with us. Black Rock Galleries is the tri-state's largest estate liquidator serving New England and the greater New York City area. We are the trusted source for expert appraisals, auction services, estate sales, and consignments. Black Rock Galleries is the east coast's largest and most trusted estate liquidator, with locations in Connecticut, greater Boston, MA and Raleigh, NC, Dallas, Southport, Apex, TX. We are the best source for expert appraisals, auction services, estate sales and consignments. We have served thousands of families and estates with compassion, professionalism and expertise. BRG works with attorneys, executors, realtors and families to bring the greatest return on personal and estate property in the current market. Our unique combination of services make us the easy choice to get the job done in a timely and stress-free manner. We are with you from the initial consultation to the final clean out. Our house-built online auction software platform offers clients a dynamic approach to liquidating their personal property. This venue is most successful in bringing the best return with the least amount of disruption for our clients. See our services page for a complete description of this offering. Judaica Glazed Ceramic Architectural Formed Mezuzah Case #203329