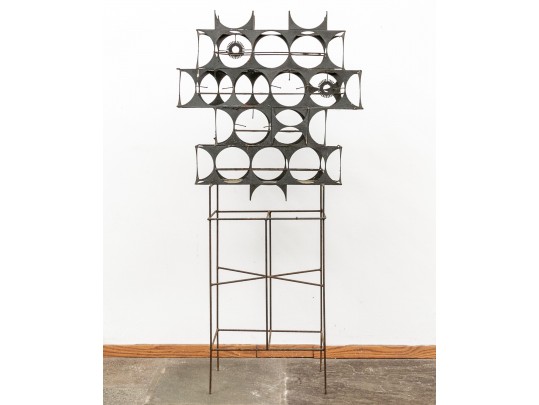 An impressive openwork four- tiered iron candelabrum in black paint with some large circles on the front, each tier with smaller circles for candles. The frame with curved pointed elements and the top two and lower tiers with attached flat horizontal pieces. Two tiers each with an attached serrated decorative circle on the end. Made in one piece with the tall rectangular open stand with center X stretcher. The noted artist and designer worked in a variety of media including metal and is known for his candelabra sculptures.
H. 51 1/2", greatest W. 15", stand Depth 8 1/2"
Condition: stand worn with some rust, the candelabrum flat pieces with cracks and losses, some rust, overall dusty- all can be remedied