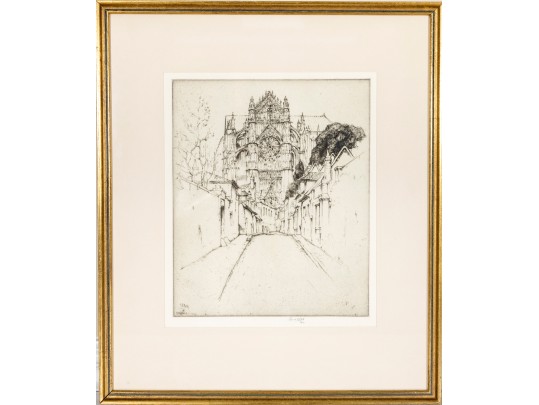 Hand-signed etching depicting an architectural impression of French Canthédrale Saint-Pierre de Beauvais. Printed in black ink on cream colored paper and dated and signed on plate and also in pencil along bottom edge. Mounted with mat and gilt frame.
Ernest D. Roth (1879-1964) was one of the premier American artist/etchers of the early twentieth century. Born in Germany, his family emigrated to the United States when he was a young child. Roth studied painting at the National Academy of Design with Edgar Ward and George Maynard and etching with James David Smillie. In 1905, Roth began traveling regularly to Europe to etch the antique architecture of hill towns and the great cities there. After 1920, his focus turned making prints of the architecture of New York and Philadelphia.