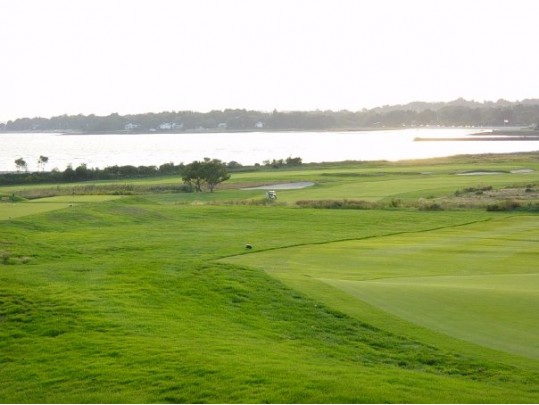 Golf For Three Players At The Country Club Of Fairfield, Fairfield CT

Bid now for a round of golf for three (3) at The Country Club of Fairfield overlooking Long Island Sound in Fairfield, CT. Since a member must be present to play this private course, the 4th person is the member and affiliated with the donor.

The Country Club of Fairfield was founded in 1914 by Oliver Gould Jennings and located on a parcel of land ominously nicknamed Mosquito Hill.It consisted of a collection of onion fields that sloped down to a malodorous tidal marsh. Jennings hired Seth Raynor to design and build the golf course. A protégé of Charles Blair Macdonald, who was known as the father of golf in America, Raynor crafteda links-style layout that featured versions of many of the best golf holes in the British Isles. It was an enormous landfill project that took several years to complete, and the course did not officially open until 1921. Hall of Fame golfer Walter Hagen was among those in attendance that first day.

The Country Club of Fairfield was one of Raynor’s first solo efforts, and he went on to design a number of top tracks in the U.S., including Shoreacres outside Chicago, Mountain Lake in Florida and Fishers Island off the Connecticut coast. But Raynor was not the only architect of note to work on the Country Club of Fairfield course, as A.W. Tillinghast and Robert Trent Jones Sr. also added their touches over the years. The result is a layout that not only servesas a superb members course but also as a challenging venue for tournaments such as the Met Open, the Connecticut Open and the Met PGA Championship.

It is rightfully regarded as one of the best in the country. The round of golf will be played at a mutually agreed upon time between the winning bidder and the donor.