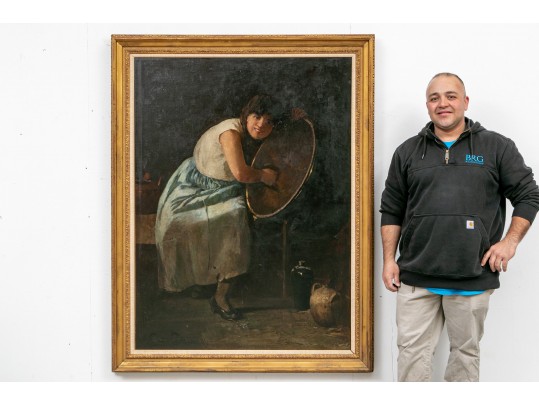 Emil Carlsen (Danish/American, 1853-1932) Oil On Canvas Painting, Portrait Of A Maid In An Interior

Emil Carlsen (Danish/American, 1853-1932) oil on canvas painting, portrait of a maid doing in an interior. The female maid figure is depicted looking directly at the viewer with a smile on her face and cheerful manner. She is depicted washing what appears to be an oval tray with blue skirt and white top with a vase and jug by her feet.
Signed Emil Carlsen and dated what appears to be '81 in the lower left corner.
Sight: 53"H x 39 1/4"W
Frame: 61 1/2"H x 47 1/2"W

Condition: Craquelure and what appears to be an old restoration at the bottom of the canvas where it appears there was a tear with some in painting and restoration near the maids foot, the lower left corner and lower right corner.