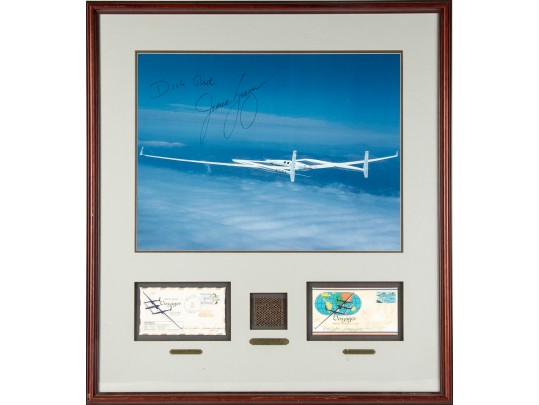 A Beautifully framed composition of the following items:

Sample of composite “Honeycomb” material that plane was constructed with.

Illustration of Plane in Flight, signed by Pilots with COA

COAs are located on the back of the frame.


From the Chicago Tribune:

Pilots Dick Rutan and Jeana Yeager proved that it could be done, and airmail collectors have tangible proof of the flight in the form of a cover that was actually carried aboard the record-breaking voyage.

There were only 750 covers carried aboard the Voyager due to weight restrictions. The specially prepared lightweight envelopes altogether weighed slightly more than two pounds. The paper used in the envelopes was so light and thin that automated folding machinery could not handle the job, and the covers had to be folded and glued by hand.

Two pounds may not seem like a lot of weight, but each additional pound of cargo required an extra six pounds of fuel to keep the plane aloft. When it was learned that the Voyager landed with only 9.2 gallons of usable fuel left, it is understandable why every ounce of weight was so critical. Incidentally, 22 of these covers weighed one ounce.
The covers carried aboard the 25,012-mile voyage around the globe have two postmarks from Edwards Air Force Base, dated on takeoff Dec. 14, 1986 and on landing Dec. 23, 1986. There is also a rubber stamp with all the data of the flight and a special red color onboard stamp, ''Carried on Board Voyager Aircraft.'' These cachets on the envelopes were applied after landing as well as the autographs of the two pilots. The top and bottom outside borders are red, and the inside border is blue against a white envelope.

Stamp Sellers are selling these cover individually, unframed for $1300-$1600 each

A poster depicting the first non-stop, non-refueled flight around the world in the Rutan Voyager aircraft from December 14 to 23, 1986 by Dick Rutan and Jeana Yeager. This frame includes a signed poster with the aircraft, two stamp covers and a honeycomb sample of the construction. Comes with certificates of authenticity mounted on verso.
Dimensions:
Sight: 25 1/4" x 28 1/4"
Frame: 27 3/8" x 30"
Condition: two minor scratches to left side frame.

Dick Rutan & Jeana Yeager Signed Poster With Stamp Covers #130625. Black Rock Galleries provides high end estate liquidation services through online estate auctions and a 50,000 sq ft designer showroom. estate liquidator, estate sale, online auction, antiques, fine art, liquidation, clean outs, auction, consignment, interior design, fine jewelry, collectibles, appraisals, estate appraisals, estate services, decor, furniture, furniture consignment, antique center, consignment shop. We offer appraisal services and specialize in fine art, jewelry, antiques and decorative arts. Sell with us. Black Rock Galleries is the tri-state's largest estate liquidator serving New England and the greater New York City area. We are the trusted source for expert appraisals, auction services, estate sales, and consignments. Black Rock Galleries is the east coast's largest and most trusted estate liquidator, with locations in Connecticut, greater Boston, MA and Raleigh, NC. We are the best source for expert appraisals, auction services, estate sales and consignments. We have served thousands of families and estates with compassion, professionalism and expertise. BRG works with attorneys, executors, realtors and families to bring the greatest return on personal and estate property in the current market. Our unique combination of services make us the easy choice to get the job done in a timely and stress-free manner. We are with you from the initial consultation to the final clean out. Our house-built online auction software platform offers clients a dynamic approach to liquidating their personal property. This venue is most successful in bringing the best return with the least amount of disruption for our clients. See our services page for a complete description of this offering. Dick Rutan & Jeana Yeager Signed Poster With Stamp Covers #130625