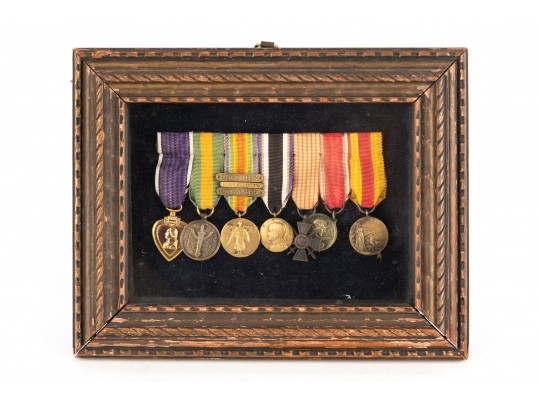 Collection of seven World War 1 service medals. Includes:
-Purple Heart,
-World War 1 Victory Medal,
-French Croix de Guerre des Théatres d'Opérations Extérieurs medal (accepted as foreign decoration by US mliitary, given to Americans following war in 1921),
-Mexican Border Service Medal (given to those who posted on the Mexican border between 1916-1917),
-Occupation Medal (given to those who served in Germany or Austria-Hungry between 1918-1923),
-French La Medaille Commemorative de la Bataille de St.Mihiel. (given for to those who served with allied forces during the two day battle that took place on the 12 & 13 of September 1918.

Each mounted on purple velvet and presented in behind glass in a carved frame. Medals appear to be unissued. Good condition with frame having some scratches and finish loss.