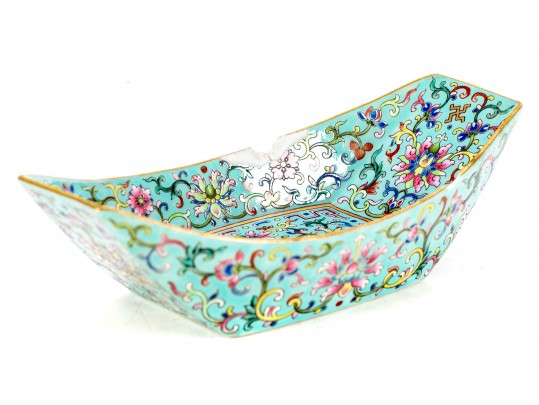 Late Qing Dynasty, famille rose enamel decorated on turquoise ground porcelain rectangular form brush washer. The brush washer or coupe features a gilt trim mouth rim is rectangular in form with a wider mouth rim than foot rim and slightly bulged side walls.
The lotus scroll and Wan emblems decoration is typical of the Qing Dynasty and the wonderful way the item has been glazed with a turquoise ground is in many respects a method to duplicate a more typical cloissone aesthetic on porcelain.
It should be noted that the Wan emblems, which appear as a swastika, were Buddhist emblems representing resignation and were often used to decorate images of the Buddha. It was only in the 20th century when the Nazi's co-opted the emblem that it became recognized as a swastica. In truth it is the Chinese Wan emblem.
The bowl with a 3 character personal (artisinal) hall mark in iron red is most likely Late Qing Dynasty.

Condition: The bowl is listed as is due to the two chips and resulting losses, one on each side wall and can be seen in the lot photographs. The porcelain bowl otherwise exhibits light surface wear to the enamels which is mostly commensurate with age. The bowl is worthy of restoration or enjoyed as is for its fabulous decorative and scholarly aesthetic