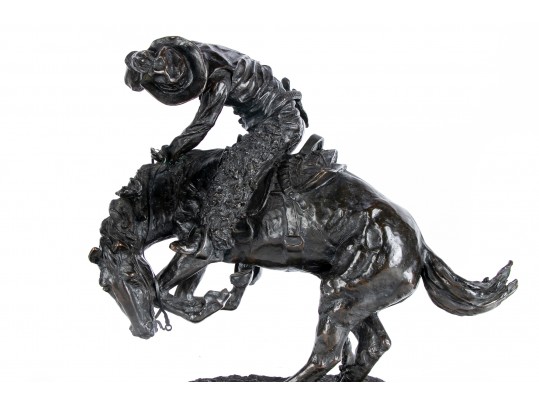 A finely cast bronze sculpture by Cecil Golding, 20th century, titled "The Rattlesnake" after Frederick Remington. The sculpture depicting a cowboy holding onto his hat while the horse rears in fright at the appearance of a rattlesnake. No detail spared in the casting of this sculpture from his amazing textured chaps to the folds of the clothes. The horse with rippled musculature to the position of the legs and head to the flying tail. The sculpture mounted on a heavily textured base and surmounted on a plinth.
Part of the Museum Collection, dated 1981 and numbered 576/1000.
Dimensions: 15" W x 9 1/2" (base) and 18" H
Condition: good
Not your ordinary Remington bronze sculpture but a more detailed and finely done piece that is a treat for the eyes as well as the hands. See our other listings for another Museum Collection piece.