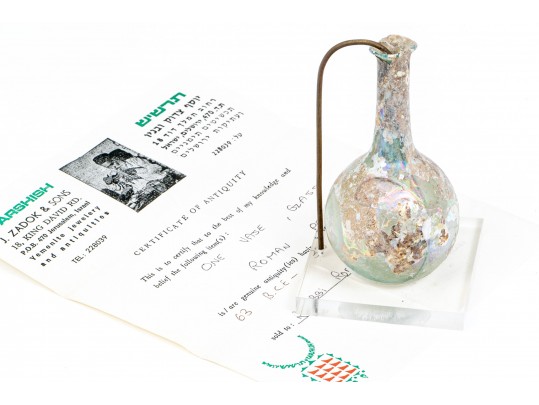 The origins of glass making can be traced back at least to the 3rd millennium BC but were limited to forms that could be poured around moulds with limited ability to create a wide variety of forms. However by roughly the beginning of the 1st Century AD glass workers had found that molten glass could be manipulated with tools which enabled artisans to create a wider variety of forms.
This lovely bottle form vase has an intriguing mouth with a piece of glass that splits the mouth aperture into halves appearing similar to a pigs snout. The wonderfully formed, globular base rises to the elegant, cylindrical neck with a flared mouth with partition through the middle.
Together with its certificate of antiquity from Tarshish - J. Zadok & Sons, 18, King David Rd. Jerusalem, Israel.
Provenance: Rabbi Robert A. Rothman
3 1/4"H

Condition: The surface finish has a nice iridescent quality but it is uncertain whether there is fracturing or if it is inherent to the glass. There does appear to be a small hairline in the bulbous bottom but overall the vase is stable and presents well.

Antique Roman Period (63 B.C.E. - 330 C.E.) Glass Vase #205710. Black Rock Galleries provides high end estate liquidation services through online estate auctions and a 50,000 sq ft designer showroom. estate liquidator, estate sale, online auction, antiques, fine art, liquidation, clean outs, auction, consignment, interior design, fine jewelry, collectibles, appraisals, estate appraisals, estate services, decor, furniture, furniture consignment, antique center, consignment shop. We offer appraisal services and specialize in fine art, jewelry, antiques and decorative arts. Sell with us. Black Rock Galleries is the tri-state's largest estate liquidator serving New England and the greater New York City area. We are the trusted source for expert appraisals, auction services, estate sales, and consignments. Black Rock Galleries is the east coast's largest and most trusted estate liquidator, with locations in Connecticut, greater Boston, MA and Raleigh, NC, Dallas, Southport, Apex, TX. We are the best source for expert appraisals, auction services, estate sales and consignments. We have served thousands of families and estates with compassion, professionalism and expertise. BRG works with attorneys, executors, realtors and families to bring the greatest return on personal and estate property in the current market. Our unique combination of services make us the easy choice to get the job done in a timely and stress-free manner. We are with you from the initial consultation to the final clean out. Our house-built online auction software platform offers clients a dynamic approach to liquidating their personal property. This venue is most successful in bringing the best return with the least amount of disruption for our clients. See our services page for a complete description of this offering. Antique Roman Period (63 B.C.E. - 330 C.E.) Glass Vase #205710