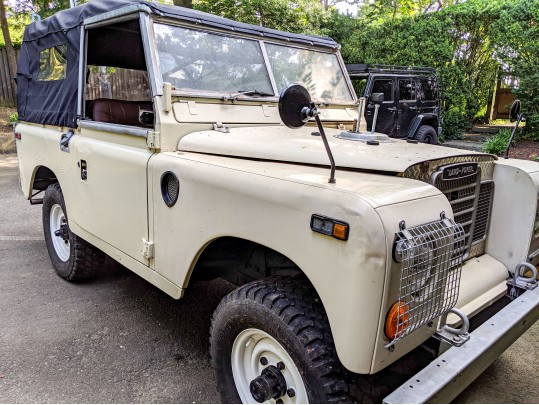 My son and I started this restoration project three years ago. We started with a mechanically sound cream colored North American Rover (steering wheel on the left side; overdrive transmission) that was fully running and began work on the interior. Over the course of the last few years, we've had the seats professionally reupholstered (beautiful brown leather), added a new canvas soft top, updated seatbelts, lined the floor with new carpeting, and covered the cracked vinyl dash in black goatskin leather. The instrument cluster was removed, repaired, and cleaned, then reinstalled. During the course of this work, we ran out of steam, and so the instrument panel is about 80% complete. We'd planned to upgrade the original fuse box (LR Series III are legendary for having finicky wiring, most of which traces back to loose or corroded fuses).

The previous owners kept the car very well maintained. It was highway driveable as recently as last year- though we've not started it in way too long, so some TLC will be needed to get it running again. The previous owners appear to have replaced the master cylinder, fuel tank, distributor cap, and other odds n ends. We replaced the oil pan gasket, as this Rover seeps fluids -- as is entirely common with all Rover models of this vintage. We did not run any compression tests, but the engine performed perfectly when running. The engine and transmission appear to be all original, with the exception of the upgrades I mentioned above. We weren't obsessed with a full period restoration, so didn't pay much attention to what was stock -vs- not- if you want a 100% stock look, you'll want to go back to the vinyl dash.

Aluminum body panels are in very good shape with minor dents and dings as you'd expect from an unrestored original. Somebody painted parts of the body and the paint is now peeling- it deserves a full sand-down/repaint by a professional, or keep it as-is if you like the patina.

Steel body parts are structurally sound, including the firewall. The frame is iffy - it was painted by a previous owner, but I suspect it's concealing some rust and the suspension could use some work. The truck leans slightly left. You might want to consider an off-frame restoration to really get this classic back to its full glory. The odometer is stuck at 106,000. We put about 25 miles onto it over the last few years, but I suspect the odometer is disconnected, as neither it nor the speedometer are functioning. I do have a brand new cable but never got around to diagnosing or fixing it.

If you're looking for a fun project, this is a great car to start with.

I have all of the original parts, including everything we removed plus a ton of other miscellaneous parts. Some notable parts include: original hard doors, a full hard top, both the tailgate and an original ambulance-style rear door, one additional front door, an original (and near-perfect) front-end panel (the current grill has a chrome plate covering some rust areas), a full-size spare, LED signal/brake lights, aftermarket door lining kits from Rover North, the original instruction manual, OEM jack, and more. I even have a special-order British thread lag bolt so you can attach the spare tire to the hood (the original attachment hardware was sadly missing). I also have several books on Rover repair to help you get started.

Bring a trailer or at least a new battery - I haven't tried to start it in over a year.