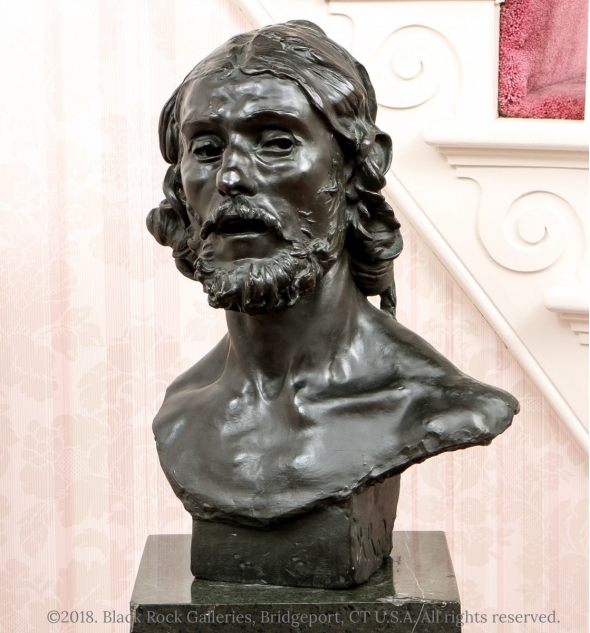 “Where did I learn to understand sculpture? In the woods by looking at the trees, along roads by observing the formation of clouds, in the studio by studying the model, everywhere except in the schools.”
— Auguste Rodin

So much has been written about Rodin — his life, his works, his philosophy. Sure his talent is on display at museums worldwide, but rarely does the opportunity to actually own an authentic Rodin work of art come to the public. That is about to change when his Buste de Saint Jean-Baptiste, Gruet Aine Fondeur, Paris cast bronze sculpture hits the auction block in the Exceptional Fall Greenwich auction at BRG.

While there are a handful of John the Baptist busts in museums, what sets this one apart from the others is the foundry Rodin selected to cast this particular bronze sculpture only cast two. One is held in the Plateau (formerly the Rodin Museum) in Seoul, Korea. The second was considered ‘lost’ ... until now. The John the Baptist sculpture has been held in the private estate collection of philanthropist and CBS co-founder, Arthur Judson. The Judson estate is offering this spectacular Rodin bronze in auction through Black Rock Galleries.

A little about Rodin

Francois Auguste Rene Rodin (1840-1917, French) was one of the most important and iconic artists of his time.

He was born in Paris in 1840. It is said that due to poor vision in his childhood, Rodin struggled in school. As a diversion, he turned to drawing. It eventually became obvious that he had talent and skills as an artist and enrolled in formal classes for the arts. Some time passed and, after several rejections from the prestigious Parisian art institute, École des Beaux-Arts, Rodin chose to work in decorative arts as an independent sculptor.

Perhaps this is when his stubborn defiance of the established neoclassic academies was born. He expressed his works with vivid realism and naturalism. However, this gave rise to criticism and rumors in the art world that Rodin used actual bodies for his castings and did not sculpt them. His response? He sculpted pieces in "larger than life" or "smaller than life" proportions to dissuade any naysayers from questioning his works.

His notoriety and fame quickly spread throughout the world by the early 20th century, particularly with showing of his works at the Universal Exposition at the Paris World's Fair in 1900. He is, perhaps, best known for his recognizable works, including: "The Age of Bronze" perviously known as the "The Vanquished" which was his breakthrough work propelling him to receive many accolades; "The Thinker"; "The Kiss"; and "The Burghers of Calais" which took about ten years to complete (c. 1884-1895).

Since his death in 1917 in France, Rodin has garnered acclaim and is widely regarded as the pioneer of modern sculpture. His work is found around the world.

The original cast of the monumental head of John the Baptist (S.6670) was made by Jr. Gruet at the family foundry in 1880. His father, preferred by Rodin, cast the piece twice more in 1891 and 1892. One of these casts was gifted by Rodin to the writer Adrien Peytel in 1895.

The subsequent fate of one of the two is known. The Plateau in Seoul S. Korea was in possession of it as early as 1999. The second has been considered ‘lost’ until its recent discovery in the Judson estate.

BRG is proud to offer what appears to be the second, lost, casting. Technically, dimensionally and aesthetically the bronze appears to be genuine. Copies are known to exist of the later Rudier casts, as well as casts made from the plaster in the later Godard Foundry. None is known of the piece at hand. Signed ‘Gruet et fils, aine (Sr.)’ It is clearly new to the marketplace with a provenance that stretches back at least 60 years.

This Rodin bronze was a prized possession and was prominently displayed on a pedestal in the foyer of the Arthur Judson home in Rye, NY. It is believed that the bronze was acquired by Arthur Judson in the 1950s or 1960s. Since Judson’s death, the well-tended estate remained in the family for decades. However, the private sale home pushed the estate’s executor to liquidate much of the estate contents, including this Rodin “John the Baptist” bronze.

This is a unique opportunity to acquire a world-class object, from an edition of two, by an iconic sculptor.

Who was Arthur Judson?

Judson, who passed away in the 1970s and predeceased his wife by almost 20 years, was a founder of CBS with William S. Paley. He spent much of his career as an artist’s manager, simultaneously managing both the New York Philharmonic and Philadelphia Orchestra. Additionally, Judson co-founded the Handel Society of New York and participated in a several philanthropic endeavors.

Because of his affinity for and close ties with the arts, Judson was an avid collector of fine art and purchased the John the Baptist bust at least six decades ago, most likely much earlier than that estimation, and kept it in his private, personal collection.

Rodin castings of Buste de Saint-Jean Baptiste produced by other foundries have sold at Christie’s and Sotheby’s auction houses. Here are some of the past results:

See it in person

The Buste de Saint Jean-Baptiste, Gruet Aine Fondeur, Paris is being offered as part of Black Rock Galleries Exceptional Fall Greenwich auction. Anyone interested in viewing this rare and iconic sculptural work of art is welcome to stop by BRG-Greenwich during scheduled preview times. BRG-Greenwich is located at 179 Hamilton Avenue in Greenwich, CT 06830 U.S.A. Previews take place from 10 a.m. to 5 p.m. on the following dates:

If you have any questions about the Rodin, please contact BRG-Greenwich at 203-900-1110 and one of our estates acquisitions team members will be more than happy to help you.