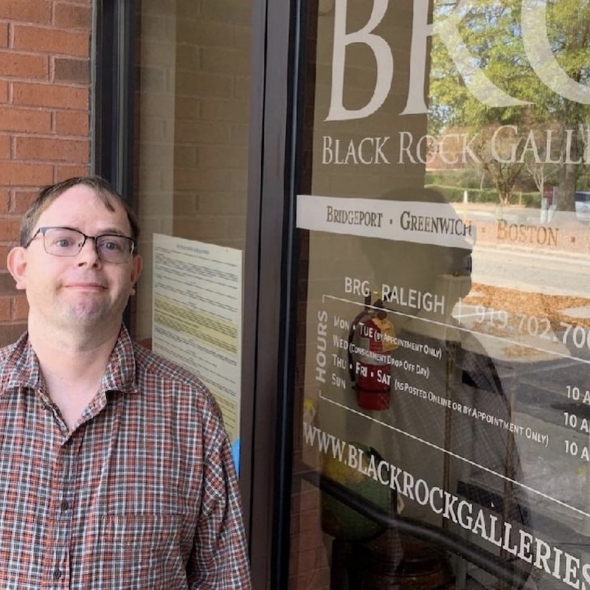 John “Wiley” Johnson Jr. is an American artist who has Autism Spectrum Disorder. Although he began painting around 2009, it wasn't until the beginning of 2020 that the world began to recognize him as an emerging artist with his first solo exhibition.

By 2021, Wiley's works were featured in a solo exhibition along with group exhibitions in and around the greater Raleigh, NC region. His works continued to be exhibited in 2022.

Wiley has licensed several oversized reproduction paintings which are installed at Sutton Square (Raleigh), Chase Bank (Durham), and the Fifth Third Bank (Wake Forest). Some notable exibitions and shows include:

"Most of my abstract paintings are filled with bright colors that make me happy...." explains Wiley. "My paintings are unplanned. I never know how they will end until the colors 'pop.' Use your imagination when you look at my paintings."

A little Background on Wiley

Wiley is self-taught, with no formal art training. His interest in art and museums began when he received a gift in fifth grade of a disappearing Van Gogh toy. His painting career began as a way for him to cope with the challenges associated with Autism Spectrum Disorder and is an essential part of his therapy.

"I am inspired and motivated to paint because it makes me happy and gives me something to do when I am alone," explains Wiley. "My paint and canvas do not judge me because I have a disability."

Wiley's autism made it challenging for him to hold down jobs, including "traditional" part-time jobs. His art helps to connect him to his community, as well as the broader world of art. He enjoys hearing people express their interest and admiration for his art.

To date, Wiley appears to be building-up quite a name for himself in the Raleigh region. This is one reason why BRG has been pleased to offer Wiley's works of art in several Raleigh, NC region online auctions. Here's a sampling of some of the pieces...